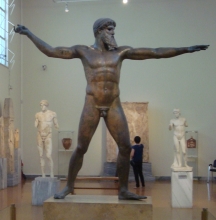 Our minds have been poisoned by wrong assumptions about the origin of our civilization. Pericles, Socrates, Plato and Aristotle were not the ones that built the Hellenic culture they were the ones that presided over its destruction. The ones that built that magnificent Hellenic culture were the pre-Socratics. They built the greatest civilization this world has ever seen. Their story is about to be finally revealed. True Hellenic thought is emerging from 2,500 years of misinformation.

We need this more then ever because we like Pericles, Socrates, Plato and Aristotle before us, we are now the ones presiding over the greatest destruction of our natural resources, animal and human life this planet has ever seen. The damage has continued over the last 2,500 years.

My upcoming book “Recipes for the Revival of the Hellenic Spirit” will uncover the true nature of pre-Socratic intelligence, nutrition and physical exercise. Recipes that built the greatest civilization the world has ever seen. It is a personal story of my lifelong quest to unravel the mystery of their advanced rational thinking abilities, their sense of freedom and individual rights, their search for the most nutritional foods, their superior training methods and their will for joy, learning and unlimited curiosity about the world around them.

All their knowledge has been in plain sight this whole time. It is embedded in the original marble and bronze statues they left behind. It is embedded in the temples like the Parthenon at the Acropolis, Temple of Poseidon at Sounio and the temples of Aphaia in Aigina Island. The origins go much deeper then the building of the temples. The stage was set much earlier for the emergence of a new consciousness for humanity based on their ability for rational beingness.  This embodied knowledge can only be accessed by shifting our perception from thinking to being. An integral part of rational beingness is proper nutrition, and properly performed exercise. Certain original statues still in existence today hold the total knowledge of physical exercise, nutrition and embodied rationality. The world is searching for answers everywhere except where the real answers lie waiting to be accessed: in the Ancient Hellenic pre-Socratic culture.

join me in this quest for Rational beingness by subscribing to my newsletter and receive exclusive updates and excerpts from my upcoming book: “Recipes for the Revival of the Hellenic Spirit – The Naked Truth”